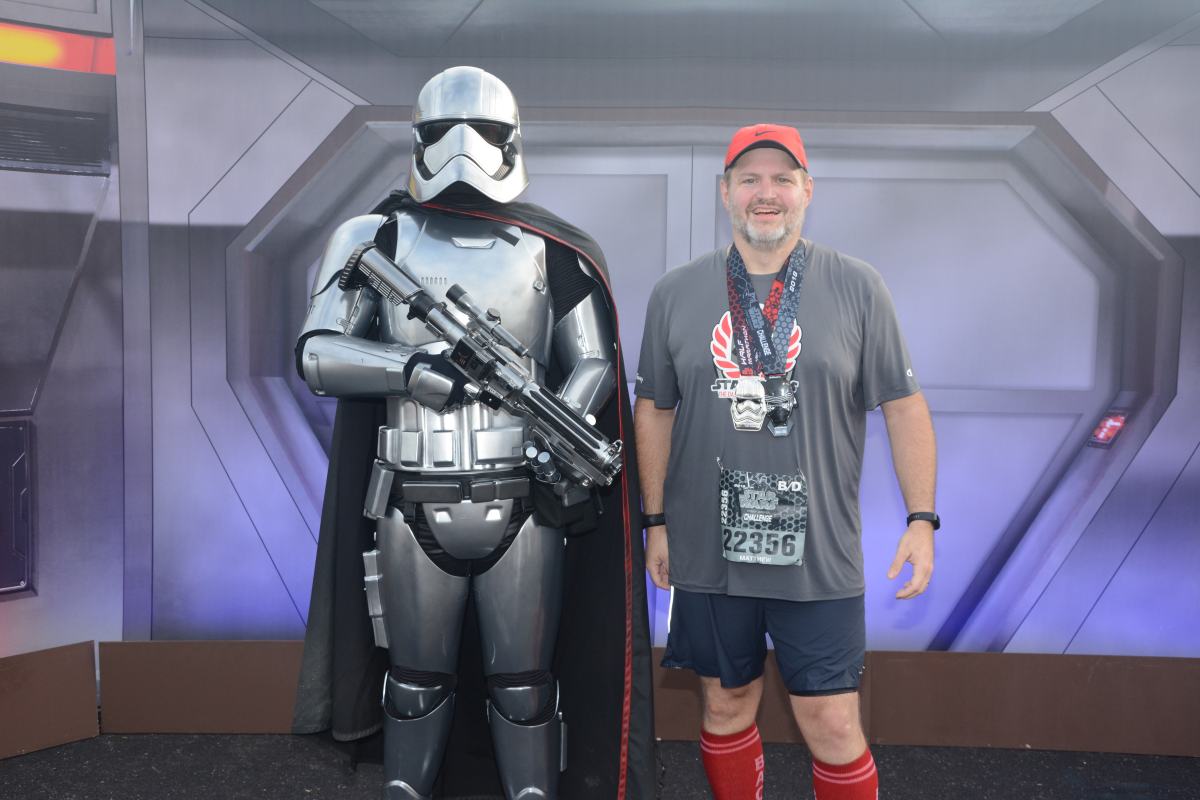 This is part two of my report of the 2018 Dark Side Half Marathon weekend – I again did the First Order Challenge, which means I ran the 10k on Saturday and the half marathon on Sunday.  I talked about the expo and the 10k here.  This is the race report for the half marathon.

So – a recap of where we are:  I had just hit a massive PR on the 10k, in a crowded runDisney race.  I was feeling really good about life in general, really.  Saturday after the 10k I was able to legitimately rest.  I took a nap with my three-year-old, and my wife made a spaghetti dinner.  Because I’m still working on that last stubborn 20 pounds to lose, I hadn’t had spaghetti in a while and it was nice to be able to enjoy it guilt-free … including the seconds.

My goal for this whole weekend was to PR the 10k (check!) and then just get out there and have fun on the half marathon.  I ran past some photo ops when I ran the half last year, and so I intended to make sure and get those this year during the run.  The ice cave on Hoth, in particular, was a picture I regretted missing out on in 2017.  So I wasn’t too worried about preparation or anything for this race – mostly I was just planning to survive it.

The weather wound up being a pre-race story.  I’d intended to go to bed around 8pm, but I was pretty wound up for whatever reason, and the forecast wasn’t looking so good.  All week they’d been calling for a good chance of rain on Sunday morning around race time, but by 8pm the night before they were saying a 70% chance of thunderstorms between 6:30am and 7:30am – right at the time when they would have nearly every runner on the course.  If there was going to be lightning they were going to have to call this off, or at least delay it – and then, of course, there was the question of whether I wanted to go run in the rain at all given that I wasn’t taking the race all that seriously.  In particular, I didn’t know (still don’t, really) how they would handle the character photos if it was raining.  So I stayed up too late researching how and when we would know if they called the race off and finally went to sleep sometime around 9:30pm.

So the 2am alarm sucked, as you can imagine.  I immediately pulled up the weather … and they had pushed the rain forecast all the way out to 10am at the earliest – some services had it pushed out until the afternoon.  The race was on!  I had some coffee, fixed a peanut butter and jelly sandwich and toasted a bagel, and headed out to Epcot.  Same deal for parking as we had on the 10k – park at the finish line at Epcot, long walk over to some busses, bus over to the start line in the Magic Kingdom parking lot.

END_OF_DOCUMENT_TOKEN_TO_BE_REPLACED 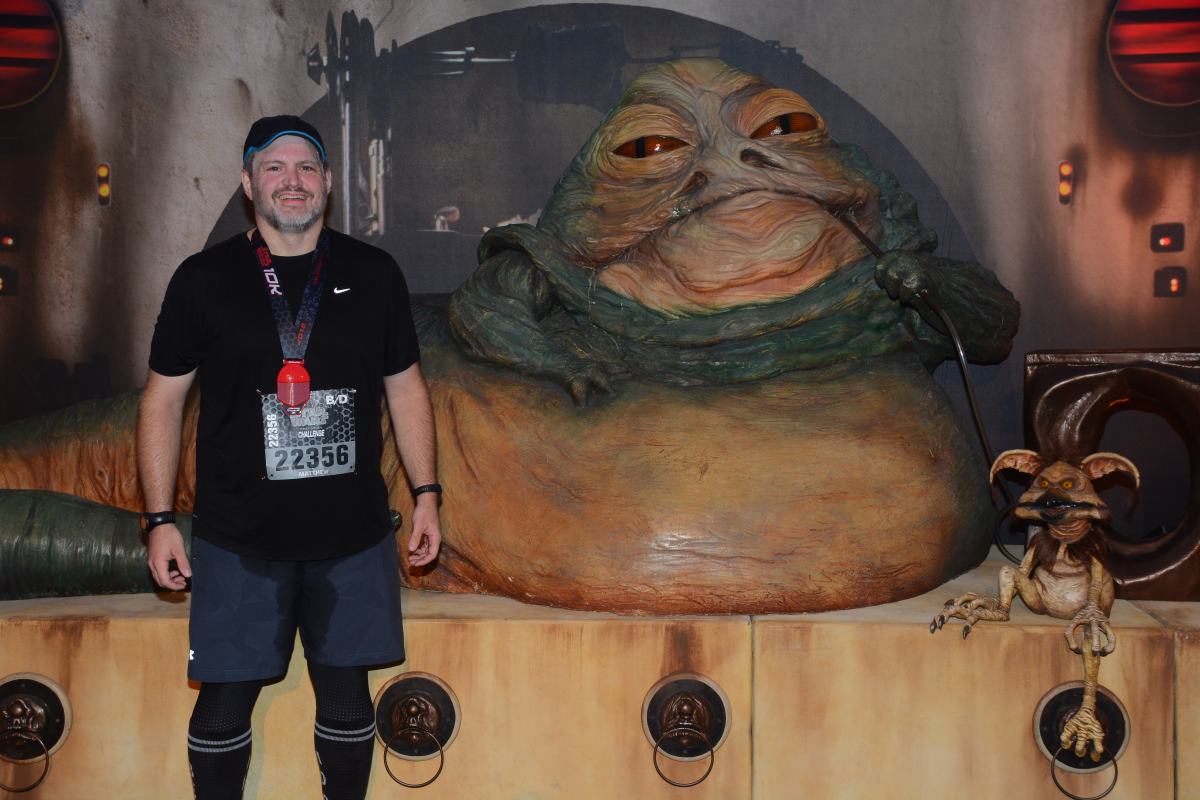 In the afterglow of Ragnar Washington DC, my friend and van-mate Dave had me convinced to run my first full marathon this spring. We tentatively chose a race, we made tentative plans, we tentatively started looking at training schedules, the whole nine. And then, back in January, he realized that a nagging injury and the time suck involved was going to make it all but impossible to get trained up, and he backed out. It took me about two seconds to make the obvious choice about what to do next.

The space on my calendar meant I got to do the Star Wars First Order Challenge at Walt Disney World again!

I ran the Dark Side Challenge last year and loved it, even if it was quite warm and humid, and even if I didn’t even sniff PRs. You don’t try to PR runDisney races, you know? And I’m such a Star Wars nerd that I was feeling bad about NOT doing it even as I was planning (tentatively!) my first full marathon. I’ll likely get that full marathon under my belt one day, but that day was not to be in 2018.

I will again split this up into two parts – here I’ll talk about the expo and the 10k, and in the next part I’ll talk about the half marathon. Because I described things in some detail last year, I’ll probably skip over some of it this time – if it feels like something is missing, you can always read last year’s report here.

So I took Friday off of work to handle the expo again this year. I just prefer to not have to worry about being rushed or feel the pressure of timing at all. The expo is held at the ESPN Wild World of Sports complex, and just like last year, by the time they opened things up the line was quite long and I’m glad I got there early enough to be second in line. If there is a chance I’m going to be waiting in an extended line anyway, I’d rather do it that way.

END_OF_DOCUMENT_TOKEN_TO_BE_REPLACED 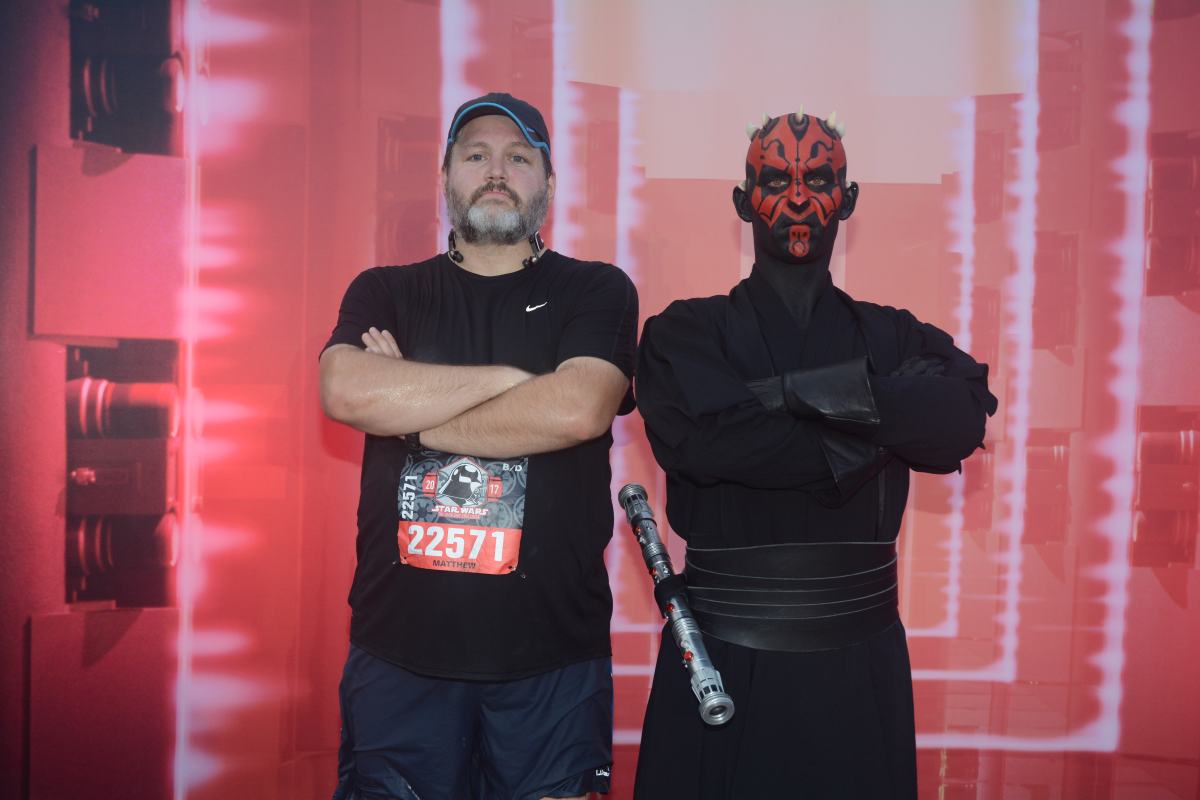 This is part 2 of my Dark Side Challenge at the Star Wars Dark Side Half Marathon weekend.  If you want to read my review of the 10k, you can find that here.

Okay!  When last we met, I was finishing up the Star Wars Dark Side 10K and then going to run another mile and a half chasing my kid around an inflatable obstacle course with a camera.  That was fun!  Really!  Enough that it requires multiple exclamation points!  But, it did leave me with a couple of challenges going into the second half of the Dark Side Challenge – the half marathon.

I was not, when I was chasing him, wearing running or technical equipment.  I didn’t have my compression shorts on.  And (and there is no way to do this but just to spit it out and get it over with) – I hadn’t prepared my nipples.  And though I didn’t leave that event actively hurting (other than my throbbing feet) … I did feel a sensitivity in the force, if you know what I mean.  Some gingerness in the upper thigh region.  A little scratchiness on the man nipples.

I had allowed myself to start chafing, is what I’m saying. END_OF_DOCUMENT_TOKEN_TO_BE_REPLACED