I thought that Ragnar DC was going to be my last run for a while.  My plan had been to run that event, enjoy myself, and then take some time off from running to focus on some CrossFit goals.  I like how running makes me feel, but sometimes the actual doing of the thing is not my favorite.  And then, I ran Ragnar DC, and the curious thing that happens when you get around other runners having a good time … happened.  We started talking about the next events we want to run, the next races.  We started making plans.  And the next thing I know, I’m signing up for races.

I ran the Celebration Rotary Club Pancake Run 5k last year.  That was my first real attempt at getting back into running shape and running a race.  That 2016 Pancake Run represented my first “serious” race in over two years.  And I had a good run – I missed a PR by a minute or so, which was still a good outcome for me.  The race was pretty well run, though small, which wasn’t helped by the fact that it was raining and not a generally nice day.

My sign-up for the Pancake Run this year was prompted by two things.  First, I thought I was capable of finally breaking through the 30 minute barrier in a 5k.  The fat guy holy grail of a sub-30 minute 5k had eluded me now for several races, and this looked like an opportunity to get it done.  For whatever reason, 5k races don’t make my calendar much anymore.  Since that Pancake Run last year, I have run three 10ks, two half marathons, and a Ragnar … but no more 5ks.  This was a chance to see what I had.

The other reason to sign up for this was that they do a kid’s fun run – and the kids get medals.  My 5-year old has shown a lot of interest in running in these events with me, and he particularly likes the idea of starting a medal collection to begin to rival mine.  He has asked several times about kid’s runs as part of my larger events, and this one seemed like an obvious choice.  The start line is about a mile and a half from my house, and though my race started at 7:45am, the kid’s run wasn’t scheduled to start until 9am.  That sets up perfectly, so I signed us up.

Relatively last minute, we got a nice surprise – my brother-in-law, good old 6-minute, was coming to visit that weekend and he had signed up to run the 10k, his first.  So my family was represented in each of the events.  Dan is fast enough that I told him ahead of time he had a shot of winning the whole thing.  You never can tell if these things are important to him, but I found the idea very cool.

They did a packet pick-up at town hall the day before.  I swung through on my way to work to pick up all three bibs and the shirts for me and Dan.  Our bibs had chips on them for timing, so they were obviously specific to us, but the bibs for the kid’s run were a stack of the race bibs you can buy at any running store.  Because I was the first one to pick up a kid’s bib, I got #1 for Noah.  He was excited for the run, anyway, but this was extra cool.

The morning of the race, Dan and I headed over a bit early to take care of bathroom and warm-up duties.  Plenty of port-a-potties, and a lot more people than were there the year before.  There was apparently a group warmup that we missed, and they sang the National Anthem though we were way back and couldn’t really hear it.  Dan lined up at the 10k start and took off at 7:30am.  The starting line for the 5k is in a different place than the one for the 10k, so they actually have to move the timing mat between the races – this causes a delay in the 5k start, and we got lined up to go.  Last year I lined up near the middle and got bottled up nearly immediately.  I learned that lesson and lined up about three rows from the front this year, and that worked out perfectly.

3-2-1, and we were off.  Because I was shooting for 30 minutes, which requires a 9:39 or better pace, my goal was to go out fast and try to hold it as long as I could, and then settle back into a 9:30 or so pace to bring it home.  I know from recent runs that I am capable of handling the 9:39, so I just wanted to build myself a cushion at the beginning.  And that is basically how this turned out. 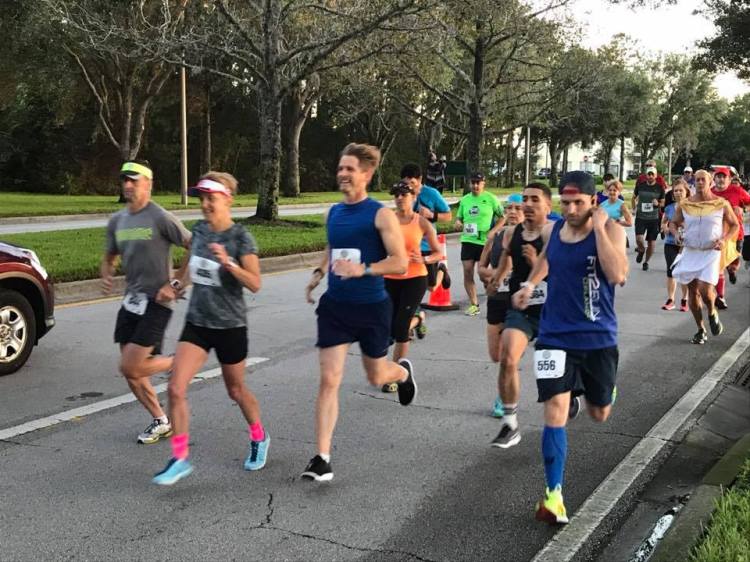 My spot for lining up was perfect.  The guys in front of me took off, never to be seen again.  But nobody really passed me, either.  So I wound up being in just the right place.  This course winds around a little bit, and one benefit I had was that I knew where we were going.  I tried to focus on my breathing and hitting the tangents as closely as possible.  The weather was nice – temps in the upper 60s, low 70s, and low humidity – so everything was set up for this to go very well.

The first mile was a standard 5k first mile – get out really fast and try to figure out whether you can hold that pace.  Maybe half a mile in our course converged with the 10k course, so by the second turn there were several fast people around, which helps with that motivation as well.  I was being passed by super-fast 10k runners, but that was it.  My brother-in-law was already ahead of me by this point, and I didn’t see him again until the finish line.  I finished that first mile in 8.23, which may be the fastest mile I have run since high school.

Mile #2 featured a little out-and-back into one of the big parks in town, and so I was able to see a couple of friends and gym-mates that were also running.  I still felt good, though my shins were starting to act stupid, like they do when I’m trying to run fast without warming up super well.  I didn’t think I could hold that 8.23 pace, so I was deliberately throttling down to avoid a major blow-up near the end.  I finished the second mile in 8.57.

By this point, I was so far ahead of my goal pace that only an injury or something really weird could have kept it from happening.  I was 2 miles in in 17.20, so I had over twelve and a half minutes to run 1.1 miles.  I throttled back again, just to make sure I didn’t bonk hard, and tried to focus on my breathing.  The last bit of this race runs by the elementary school in town and then heads back up to the finish line.  My brother-in-law had already finished his 10k, but wasn’t expecting me in for another couple of minutes, so was surprised to see me coming.  He ran me in the last hundred yards or so for a strong finish.  Mile #3 came in at 9.31, and then the last 0.1 mile at 29 seconds, for a finishing time of 27 minutes and 20 seconds.

I am now officially in better shape than I have been in since high school.  And though I was faster back then, I am almost certainly stronger now – if I could use the hopper test, there is a good chance I am in better shape than I have ever been.  It is immensely gratifying to know that all of this work and focus is paying off, not just in how I look and the clothes I wear, but also in the physical things my body is capable of doing.  27.20!  Woot!

A three minute PR, under 9 minute miles, getting the fat guy holy grail, and watching my family be a part of all of this?  That’s a good day, right there.